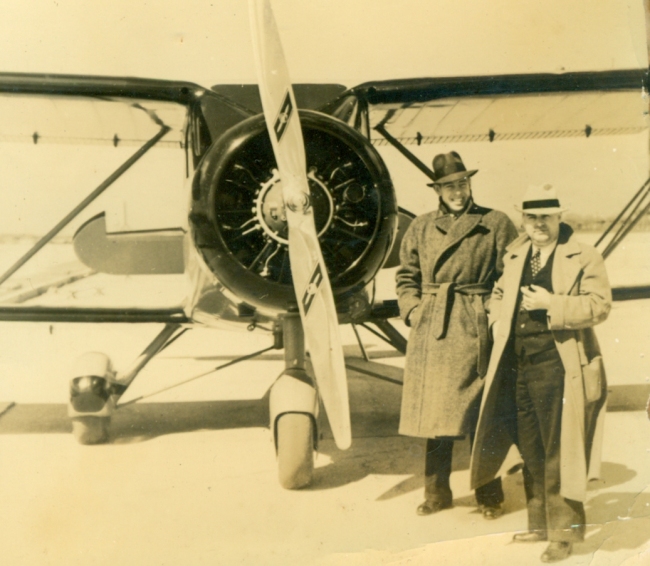 Today is Chum’s turn.  He’s the smiling, handsome fellow.  The man he is standing with is Howard Ailor, the New York distributor for Waco Aircraft Company, out of Troy, Ohio.  I chose to post this picture because of Ailor’s important role in young Mont’s start.

Some believe we all have angels who arrive when we need them, and set us in our life’s direction.  Howard Ailor was just such a man for Chum.

Following Chum’s discharge from the Navy in 1933, little opportunity–actually no opportunity beckoned in Depression-era New York City.  Enter Howard Ailor.  After making the rounds of all the existing air carriers in the city, Chum paid his last call out at Roosevelt Field, on Long Island.  A smiling, all-knowing, Ailor took one look at the young pilot and told him he’d have to make his own luck.  America was fresh out.

Crazy at it may seem, Howard convinced Chum to buy his own plane, start his own business, and for good measure moved stuff around in the Waco office, so the young man could have office space, too.  And that act of kindness made all the difference in Mont Chumbley’s life.

When I was a kid we played “Blind Man’s Bluff,” a game that began by spinning the person who was “IT.”  Blindfolded, the kid had to find everyone scattered around without looking.  In that same vein, Chum couldn’t see.  He was blinded by his uncertainty, a devastated economy, and no network of friends.  Howard Ailor stopped the spinning and sent the young man into the right direction.