We couldn’t find a seat on the Metro. In truth, we couldn’t even see the Metro station, just a mass of humanity.

This event challenged the notion of enormous. The moment was historic.

Dumb luck came to our aid. A city bus hissed to a stop at the curb, and my friend and I hopped aboard, joined by a couple hundred new friends. The atmosphere crackled with joy, solidarity and diesel fumes. I damn near busted out with “99 Bottles of Beer on the Wall.”

The driver seemed to catch our enthusiasm and peppered us with questions about the Women’s March. What time, where, how long would it last? She smiled realizing her shift would end before the speakers began, and I still wonder if she made it.

Nearly five hundred thousand of us convened on the National Mall, and expressed our heart-felt objections concerning the newly elected president. We marched as one.

By the way, no one violently attacked the halls of government. Though, if memory serves, I did flip off the Trump Hotel.

In October, 1969, 250,000 opponents of the Vietnam War descended upon Washington DC. In an event called Moratorium Day no one violently attacked the halls of government.

In the swelter of a 1963 Washington summer, Dr King convened the “Poor People’s” March on Washington. 250,000 Americans petitioned their government for a voting rights bill. No one even considered attacking the halls of government.

In the Spring and Summer of 1932 during the depth of the Great Depression, somewhere around 20,000 desperate men, some with their families, marched on Washington DC as part of the Bonus Army. For their trouble the marchers were attacked by Douglas McArthur, and an army detachment, who instead, burned out the shanties of the desperate. No one attacked the halls of government.

On March 3, 1913, the day before the inauguration of Woodrow Wilson, nearly 10,000 women paraded down Pennsylvania Avenue promoting women’s suffrage. Though they were attacked by angry men along the route, not one woman attacked the halls of government.

Nearly 10,000 American’s joined Jacob Coxey’s Army in May of 1894. An extended economic depression caused mass unemployment, and the “Army,” demanded a public works bill to create jobs. Though the marchers reached the Capitol, and Coxey, himself leaped up the stairs to read his public works bill, the police opened up some heads, and the crowd dissolved. No one attacked the halls of government.

Public protest is as American as baseball. The difference lies in our use of free speech. On January 6, 2021 a mindless, misguided, and dangerous mob hijacked the right to assemble, instead escalating into a violent attack on the halls of government. There is no middle ground; this was a attempted coup to seize power.

And that sense of heart-felt objection, concerning that president proved accurate.

Many of us have read JK Rowling’s Harry Potter books and/or watched the films. The author created a wondrous world of spells, incantations, and even included law and order via three unforgivable curses.

There are guardrails in this tale, and a bit of a messiah storyline. Harry willingly sacrifices himself, as had his parents and many others before. However, the “Boy Who Lived,” does, and returns to fight and vanquish wickedness.

Love, too, permeates the storyline, and the righteous power of good over evil.

But that’s not my take.

As a career History educator I came to a different conclusion; Harry Potter told me that failing to understand our shared past can be lethal. And that was the metaphor I preached to my History students.

Harry rises to the threat and defends all that is good and valuable in his world. If he didn’t, Harry could have been killed and his world destroyed.

It’s so apropos at this moment in our history to grasp our collective story as Americans.

Honest differences within the confines of our beliefs is one thing. Obliterating the tenants of democracy is quite another.

Americans cannot surrender our country to this would-be dictator, the things that have cost our people so dearly. Freezing soldiers at Valley Forge did not languish to enable DJT to trademark his brand to hotels, steaks or a failed university. The fallen at Gettysburg, and the suffering in Battle of the Bulge was not to pave the way for DJT to get us all killed from a ravaging plague. The girls who perished in the Triangle Shirtwaist Fire, the miners murdered in the Ludlow Massacre, or humiliated Civil Rights workers beaten at the Woolworth’s lunch counter was not for Donald Trump to validate racism and sexism and undo labor laws.

He doesn’t know our nation’s history, and as George Santayana warned us, we are condemned to sacrifice all over again. 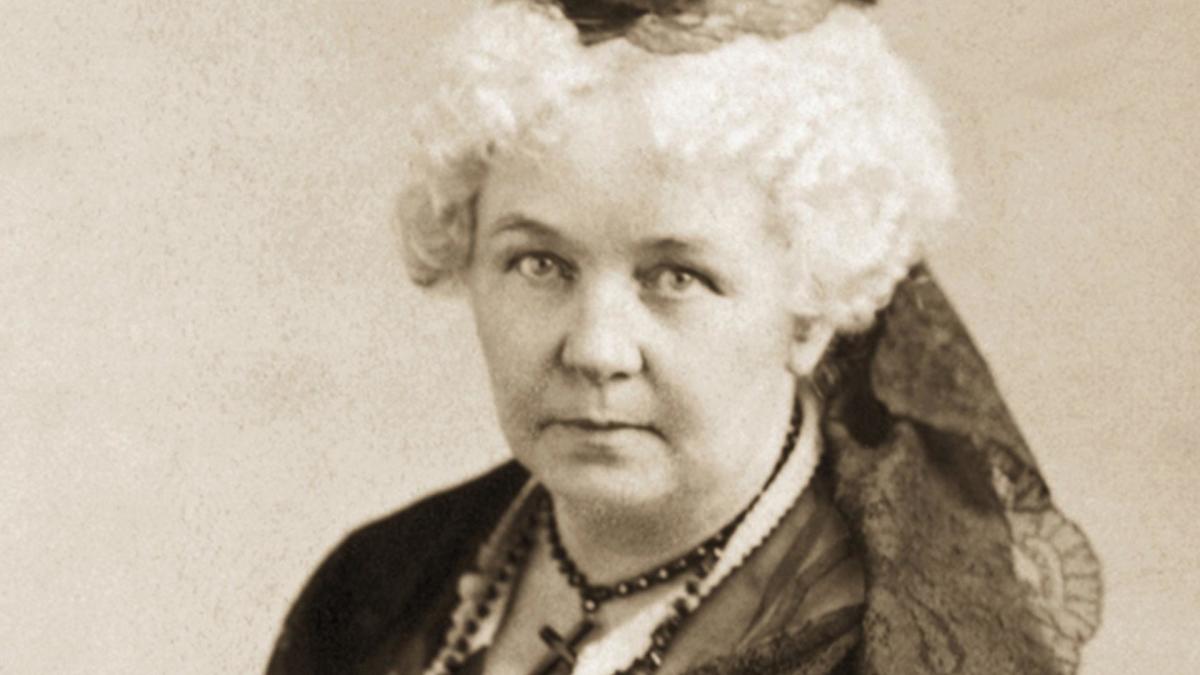 I’ve begun initial research on a project concerning this woman, Elizabeth Cady Stanton.  She may be the most essential figure of the American and International Women’s Movement and arguably one of the most forgotten.

Generations of women are far more familiar with Stanton’s colleague,  and dear friend, Susan Brownell  Anthony, but that was by choice.  While Ms Anthony made an early and abiding decision to promote women’s suffrage over any other injustice facing females in the 19th Century, Cady Stanton, a more introspective person,  tended to explore, through study and thought, the profundity of patriarchal injustice.

Mrs Stanton’s analytic temperament often irritated the practical Ms Anthony,  who frequently cajoled Mrs Stanton to get out there and organize.

In a sense Ms Anthony married the suffrage movement, refusing to commit civil suicide by entering into a conventional marriage. Freed from domestic demands, she crisscrossed the nation assembling one of the most massive political movements in American History.  In contrast, Mrs Stanton married a man she passionately loved, raised a brood of seven,  all the while cultivating an interior life; a universe of analysis that evolved, questioning standards and beliefs relegating women to a subservient role.

These differences in style and aims, though the cause of many personal disputes, also somehow worked for these two strong personalities. While Mrs Stanton examined the absurdity of patriarchal traditions, and crafted sound positions on the innate equality between the sexes, Ms Anthony tirelessly toured the country, speaking to anyone who listened on the right of women to vote.

In a real sense Mrs Stanton sojourned through the metaphysical world in a search of truth, while Ms Anthony counted the miles of track to her next speaking engagement.