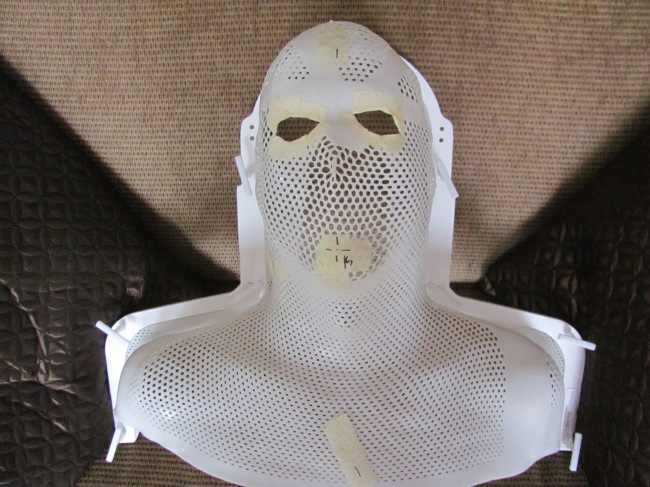 A blond nurse in heavy makeup called his name, and my husband dutifully rose, glancing at me to do the same.  Delaying for a moment, debating my options, I stood too.

Back in an examination room his radiation doctor, a young, attractive cowgirl, took pictures of his neck–both sides–and displayed a CT scan undeniably bearing a clear tumor profile. There was no mistake, the ENT’s diagnosis was correct–Chad had stage four tonsil cancer and surgery became paramount.  This radiation doc announced that she had all ready reserved a date for his tonsillectomy.

This particular oncologist was a very perky, affirming young physician.  Wearing cowboy boots, and a western cut shirt featuring mother-of-pearl snap buttons, she and her assistant in smiling upbeat tones clarified what we could expect from his cancer treatment.  She described a restraint mask, gesturing toward his imaged tumor, that she would construct.  Using the proper measurement of his jaw line and tumor dimensions, the mask would provide marked targets for the radiation laser.  Chad would have to sit for a plaster fitting soon so she could fabricate a precise mold.  The radiation would blast any unchecked cancer cells the surgery didn’t remove.

Smiling with her mouth, not with her eyes, the oncologist admitted that neck-throat-esophageal cancer is the worst type on the patient.  She elaborated her point explaining that the neck has no thick layers of skin or muscle to protect the esophagus from extensive damage.  Elaborating, the doctor continued that as soon as the tonsils were out, Chad would undergo a minor procedure to have a feeding tube placed into his stomach for sustenance.  His throat would very likely become too burned to perform a swallowing reflex.

When we arrived home I confessed to him that I didn’t think I had another crisis in me.  In my previous marriage there had been nothing but catastrophe–in this marriage we had struggled with a blended family.  Just the thought of another calamity paralyzed me from the inside out.  I honestly wanted some way to take a pass on this new one.  He just hugged me, almost in desperation, saying everything would be all right.  I wasn’t assured.