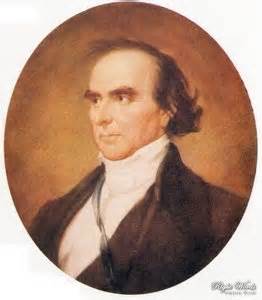 I wish to speak to-day, not as a Massachusetts man, nor as a Northern man, but as an American, and a member of the Senate of the United States. It is fortunate that there is a Senate of the United States; a body not yet moved from its propriety, not lost to a just sense of its own dignity and its own high responsibilities, and a body to which the country looks, with confidence, for wise, moderate, patriotic, and healing counsels. It is not to be denied that we live in the midst of strong agitations, and are surrounded by very considerable dangers to our institutions and our government. The imprisoned winds are let loose.

The above words were powerfully delivered by Senator Daniel Webster on the 7th of March, 1850. The occasion concerned the Fugitive Slave Act, a piece of explosive legislation forcing the return of runaway slaves to the South. Webster truly fell on a political sword to keep our nation whole. Notable in his grand eloquence was his specific reverence, and deference to the chamber Webster addressed, the august United States Senate.

I found myself quite uncomfortable viewing the State of the Union on Tuesday night. Each year, this duty is clearly defined for America’s Chief Executive. Article 2, Section 3 of the U.S. Constitution mandates that the President shall . . . give to Congress Information on the of the State of the Union . . . The word is “shall,” not “may.” So it was with personal distress, that we all witnessed such bad behavior from the right side of the aisle.

Beginning with the President’s first State of the Union message in 2009, and the appalling “you lie” heckler, conduct from the opposition has deteriorated. Senator Webster’s expressions of propriety and dignity have been replaced by frat boy behavior, apparently condoned by party leadership. Texting, chatting, applauding inappropriately is, well, just embarrassing to this student of America’s distinctive political legacy.

As a teacher, that blatant disruptive rudeness would have sent you to the hall. And speaking of classrooms, why should any student show respect for any institution when elected role models behave so badly, so publicly. I’ve seen you at 16, you’re the boneheads in the back row, working overtime to shift the attention from the focus of the lesson to your own self important, corrosive conduct. To validate the lowest kind of public behavior is the last example our students need in this divisive era. Demonstrate honorable behavior, show some restraint, if only for the great legislative leaders who served and sacrificed before you. Conduct yourselves with the dignity your office represents.

If, indeed, the majority party aspires to national leadership you must be a party worth following. Last night represented and celebrated the best thinking on the part of our nation’s Framers. This condoned pack mentality to publicly belittle the sitting President, does not serve your future aims.

As the first president, elected in 1860 from your emerging party once stated,  “All members of Congress swear their support to the whole Constitution—to this provision as much as to any other. “

In his 7th of March Speech, Webster explained to his listeners the urgency of his words. The Senator continued,

I speak to preserve the Union.
Hear me for my cause

Gail Chumbley is a retired History educator, and author of River of January. Available on Amazon