This was the situation in April, 1841. Newly inaugurated president, William Henry Harrison died after only a month in office. The aged Harrison apparently succumbed to pneumonia after delivering an exceptionally long inaugural address in the rain. Harrison, the first Whig to win the presidency, was also the first chief executive to die in office, and the Constitutional protocol of succession had never before been exercised.

Harrison’s Vice President, John Tyler, moved quickly upon learning of the President’s demise. He located a judge to administer the oath of office, and moved into the White House. When members of Harrison’s cabinet informed Tyler they would take care of the daily business of governing, he cooly responded that they could either work with him, or resign.

Tyler had been an odd choice for the Whigs to make. The party had gelled during the Jackson administration, promoting financial and internal developments over sectionalism and states rights. The Whigs further found slavery not only inconsistent with liberty, but also an obstacle to the growth of a modern nation-state. Foremost among this group was the Whig Party’s greatest voice, Senator Henry Clay of Kentucky. Clay had first been a presidential candidate in 1824, and again in 1836. However, when the Whigs met in Harrisburg, PA to choose their 1840 candidate, Clay failed to gain the  nomination, and declined the second spot in a regrettable moment of pique.

Though John Tyler had been a Virginia Democrat, he had broken with Andrew Jackson over Jackson’s misuse of presidential power. In particular, Tyler objected to Jackson’s threats against South Carolina in the Nullification Crisis, leading Tyler to forsake the Democrats, but not the philosophy of states’ rights, or the protection of slavery.

The Whigs decided that Tyler’s opposition to Jackson was good enough to offer him the second spot on the Whig ticket, and Tyler accepted. Then a month into his term, Harrison died, and this Southern Democrat, a wall-to-wall sectionalist assumed the presidency.  From there, events quickly unraveled.

If the Whig Party hoped to realize their platform of national economic growth, their hopes died under President Tyler’s veto pen. Predictably, the Whig cabinet soon grew frustrated, then disgusted with presidential obstruction. Members began to resign. Only Secretary of State Daniel Webster hung on, as he was in the middle of boundary discussions with the British. Then he, too, submitted his resignation. Shortly after the cabinet fled, the Whigs formally expelled Tyler from the party.

To their credit the Whig leadership didn’t excuse Tyler, or defend his contrary actions. No one said ‘let Tyler be Tyler.’ They publicly broke and denounced the President’s antics, though the cost, for the Whigs, came due ten years later when they disbanded.

Yet, the story doesn’t end with the death of the Whigs, but begins anew with a stronger and more principled political movement. For, from the ashes came the birth of the Republican Party, much like a rising Phoenix. And that party still exists today, if they don’t squander their good name on the shoals of Trumpism.

On a cable news program, author, Brenda Wineapple argued that the impeachment of Donald Trump resembles that of 19th Century President, Andrew Johnson. Applewine’s position may be true, to the extent that Johnson was under attack from the opposition party, however, the events that brought about the trial of Johnson were not centered on presidential corruption.

Abraham Lincoln had invited Tennessee Democrat, Andrew Johnson, onto his 1864 ticket as a conciliatory gesture toward the South. As Senator, Johnson had remained staunchly loyal to the Union, despite Tennessee becoming the final state to secede in 1861. Lincoln made clear with his VP choice that he intended to deal judicially with erring brothers below the Mason-Dixon Line.

Throughout the final year of the war, a philosophical rift had been growing between President Lincoln and the Radicals in his party, over post-war policy. Lincoln believed that Southern States had only attempted to secede, but had failed in that effort; General Lee’s surrender at Appomattox snuffing out the attempt. Since secession had been foiled, Lincoln maintained that his pardoning power provided him the authority to deal perpetrators of the rebellion.

Countering that argument were the Radical Republicans, led by Thaddeus Stevens in the House, and Charles Sumner in the Senate. This faction insisted that when the Southern states seceded, they had, indeed, committed political suicide. This, Congress maintained, gave them the authority to shape post-war policy, for, per the Constitution, they were the body that admitted new states, .

The conflict between the Executive and Legislative branches grew fierce in mid-April of 1865, when Abraham Lincoln was murdered by an assassin, elevating Andrew Johnson to the Presidency.

When it came to interpreting the Constitution Johnson not only agreed with Lincoln over Reconstruction policy, but was also a traditional ‘strict-constructionist’. In other words, his understanding of the law did not go much past the Twelfth Amendment.

Vetoing many Republican bills, including legislation creating the Freedmen’s Bureau, Johnson, refused to support civil rights of any kind for the newly emancipated. However, as fast as Johnson vetoed bills, Congress overrode his vetoes.

Born in poverty, and illiterate most of his life, Johnson’s malice also extended to Southern aristocrats. Keeping somewhat to Lincoln’s view, Johnson enjoyed nothing better than reading letters from Southern planters pleading for his pardon.

Rubbing nearly all the wrong way, Andrew Johnson plainly was not a savvy politician, and became an ever increasing nuisance to the Radical majority, who fully intended to punish the white South, and elevate the lives of Freedmen.

Animosity came to a head when Congress passed the “Tenure of Office Act” in 1867. This legislation aimed to tie the President’s hands by stating Johnson could not remove any members of Abraham Lincoln’s cabinet, without the approval of the Senate. Knowing his Constitution well, Johnson knew this bill didn’t pass legal scrutiny, and promptly fired Secretary of War, Edwin Stanton.

The House immediately fired back with eleven articles of impeachment.

Once the inevitable impeachment reached the Senate for trial, equivocating Senators felt intense heat from their Radical colleagues. Various hold-outs, uncomfortable with the flimsy case, proved difficult to sway. The central sticking point was that the Act was no more than a trap for a President who would not get out of the way. To one Kansas Senator, Edmund Ross, the whole episode was a flagrant setup. Ross believed that there was too much noise, too much turmoil, and not enough real evidence of wrongdoing.

Sensing reluctance in the ranks, the Republican majority bought more time by taking a ten-day delay on the vote. Members like Ross and other hesitant Senators, were threatened with investigations for bribery if they didn’t toe the line. However, neither stalling, nor threats changed any positions. In the end the vote to convict failed, 35-19, not the 2/3 majority required by law.

Andrew Johnson was broken by the ordeal. He quietly waited out the remainder of his term, finally to be replaced by the Ulysses S Grant in 1869. (Now Grant’s terms witnessed a lion share of corruption!)

That Andrew Johnson proved unequal to the task of governing goes without question. He was bigoted, petty, and stubborn. But this man was not corrupt, and his impeachment was more a product of tragedy, turmoil, and a struggle for national power. No overseas hotels, no bowing to foreign dictators, no obstruction of subpoenas.

Gail Chumbley is the author of the two-part memoir, “River of January,” and “River of January: Figure Eight.” Books are available at http://www.river-of-january.com and on Kindle. For more email Gail at gailchumbley@gmail.com 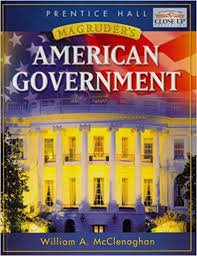 We were in the midst of text book adoption some years ago when an unexpected snag brought the process to a screeching halt.

The Social Studies Departments across our district were asked to preview an array of textbooks in the Fall of 1994. Publishers had generously provided sample texts, and we had spent hours perusing different volumes, passing our professional preferences to our Social Studies Coordinator.

Government teachers decided unanimously that they would replace their current text with the same title they had used for some years. They agreed to adopt the newest edition of Magruders American Government; a trusty standard, and the hands-down favorite of 12th grade teachers across the country. Our instructors had ready-made units, lessons, speakers, ancillary materials,, film clips, debate resolutions, etc . . . and only required the newer books with updated factual information. And their task look like a done deal, but it wasn’t.

When presented with the teachers choice the Board of Trustees suddenly balked, viscerally unhappy with the recommendation, and for a reason no one could have predicted.

A tradition in Magruders American Government is placing a photo of the current first lady inside the front cover of the text. Lord, it might still have been Mamie Eisenhower in the tattered old volumes we were replacing. Prentice-Hall, smelling an easy sale, had shipped samples of the new edition, which sent the undertaking careening off the rails. The inside photo was of serving First Lady, Hillary Clinton, and these board members lost their minds.

I taught AP American History at that time, and thought nothing of reordering Thomas Bailey’s American Pageant, another classic. We had used this text for some time, and simply needed an updated edition. However, in light of the fiasco over Magruders, I too, found my text in the crosshairs.

Wearing an understanding, sympathetic expression the district coordinator said I had to prepare a defense of Pageant too, highlighting the merits of the book over others on the market. (Fair was fair, if one book was attacked for fallacious reasons, attack the rest—better optics). And it wasn’t that I minded writing the virtues of the book, I liked Pageant, but I did mind the time the effort took from my classroom. Plus, it was so annoying that I had to jump because Mrs. Clinton had the audacity to be the new First Lady, and our board thought the end days had commenced.

The Trump era has been in the making for quite some time. The politics of 2018 was clearly taking shape as early as the 1994.