His political career was none too stellar, except for that one moment he seized history.

This dapper-looking fellow is President Chester Alan Arthur, (1881-1885). Arthur was considered a dandy, pursuing an opulent lifestyle filled with fine food, drink, and expensive suits; largely paid for from the public trough.

Arthur came of political age in the post-Civil War Gilded Age, a world of political machines, graft and corruption. When a supporter helped their man get elected, position and profit rained down in return.

This dubious system functioned rather well for victorious elective candidates through countless election cycles. The political universe of Chet Arthur and his band of Republican cronies became expert skimmers from the public trough and the public trust. In the Republican Party this faction was christened Stalwarts, and Stalwarts liked their well-oiled approach to public service very much, indeed.

Arthur, himself, had been named Collector for the New York Customs House during the Grant Administration, and money from this lucrative Customs House flowed to Arthur’s friends and political operatives. His particular patron was the powerful New York Senator, Roscoe Conkling, a master in Senate handiwork.

Opposing this Old Guard of money changers were the crudely titled, Half-breeds. This oddly pejorative moniker (too common in that era) represented a growing group of reformers in the GOP who aimed to clean up the corrupt practice of patronage. Senator James G. Blaine of Maine believed government jobs should be based on merit, not connections, and Blaine promoted the use of Civil Service Exams. In other words, Half-breeds endorsed qualified government workers over payola for their friends. The Stalwarts were horrified.

In the 1880 Presidential Election the Republicans, in a heated convention, split the ticket with candidates of both wings. For President, James Garfield, a Half-breed, and for Vice President, Stalwart, Chester Arthur, crony of Sen. Conkling. The Party felt it had fused the differences between the two factions, and the fat cats believed they could continue to prey. Then came the Garfield assassination.

In July, 1881, President Garfield, a distinguished Union general, and a former member of the House of Representatives, appeared at the Baltimore and Potomac Rail Station in Washington DC. In the crowd waited Charles Guiteau, an unhinged, office-seeking Stalwart. Guiteau approached the President in the crowd, shooting him at close range. Garfield died two months later from his infected wounds.

Guiteau had shouted, after opening fire, that he was a Stalwart, and would now get a government job. He didn’t. In fact, all Guiteau received was a date with the hangman, carried out in June, 1882.

And what of Chester A. Arthur? He assumed the presidency in a charged atmosphere of national grief. So changed was Arthur, that he promoted passage of the Pendleton Act of 1883. This act created the Civil Service Commission, and mandated written exams for classes of government jobs. The Stalwarts were horrified, but politically could do nothing. Garfield had been made a martyr for reform, and Arthur took the high road, making that reform real.

Oh, and by the way, the Mugwumps were another reforming splinter of the GOP. So infuriated by the legacy of bribery and corruption, they bolted the party in 1884 for Democrat, Grover Cleveland.

Wonder how the 2020 Election will reshape the current GOP? 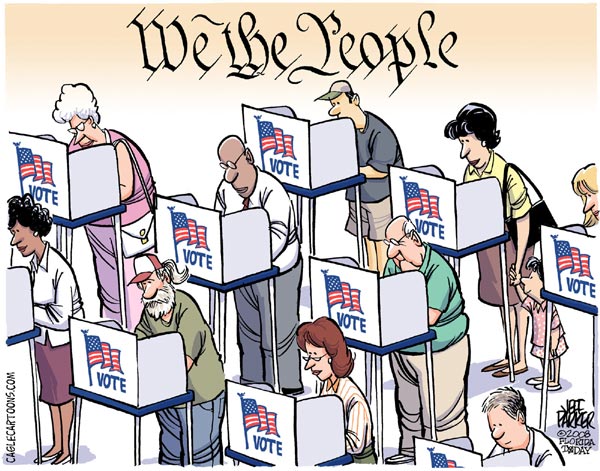 Vote, but don’t vote in fear. If concern guides your trip to the polls, clarify those fears.

While one party points to desperate and dispossessed people as threatening our country, recognize this distraction is providing cover for deeper, more substantive threats.

At this writing thirty-five people have been indicted for conspiring to hack the 2016 Presidential election. This is not theory, it is fact. Of those thirty-five, four convicted conspirators have  “flipped” and are cooperating with Federal Prosecutors to shorten their sentences in this scandal. George Papadopolous, Michael Flynn, Paul Manafort and others are awaiting their fate while they each divulge all they know about Russian meddling and their aid in that subversion.

Russia, under the direction of former KGB operative Vladimir Putin, powerful ‘oligarchs’ have organized electronic sabotage to interfere and undermine the integrity of the United States of America. Never forget that. It’s treason: providing aid and comfort to our enemies.

To silence his own critics, Putin has dispatched hit squads of assassins, at home in Russia, and abroad, using military grade nerves agents, thallium, and firearms to silence opponents. Though Putin has denied authorizing any such thing, as he did in Russian election meddling, our president says he believes him. That is a serious concern.

Friendship has extended from this White House to other totalitarian regimes similar to Putin’s. Kim Jong Un, the North Korean butcher of his own family members, and starving people, Rodrigo Deterte of the Philippines, and Erdogan of Turkey who is demanding the US release a Turkish journalist critical of the autocrat. As I write, the president still wants to do business with the Saudi Prince, MBS, despite the grisly murder of a Washington Post journalist by his order. That is a concern.

Fear is a powerful and toxic motivation to rush the polls on Election Day. However, we must all show caution in what we fear. Do we look where this administration points, or do we ignore the calculated chaos and figure out the real threat to our nation?

“Beware of Darkness” from George Harrison’s song of the same name.