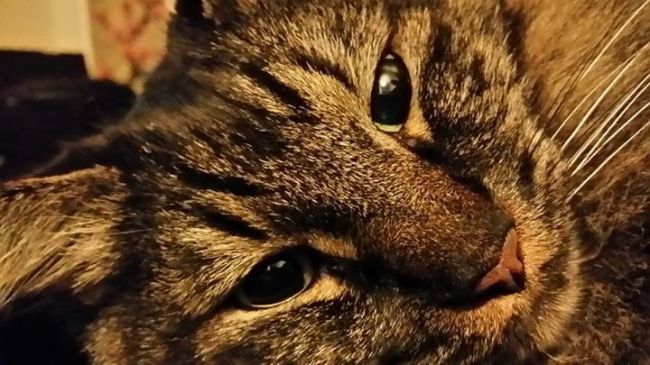 My son just text me with bad news. His kitty, Dusty died at the animal hospital about an hour ago. And on Memorial Day of all days!

He was a huge Maine Coon Cat, and had character in abundance. The poor fella was so enormous, (not fat, mind you) that he couldn’t fit into the nooks of his carpeted kitty tower. It wasn’t for lack of effort either. Leveraging into those little tunnels and rooms provided him with a constant daily challenge. Dusty, you see, didn’t understand his bigness. His lack of personal awareness was part of his charm.

When Dusty wanted in your lap, which was often, the sitter became immediately aware of his bulky girth. And more than his physical size was the size of his gentle heart.

That gi-normous lug was also the family’s goodwill ambassador. A thudding leap accompanied by a throttling chainsaw of a purr welcomed all visitors to his home. Forget the meow though. His tiny little squeak reflected more his self-awareness. A sweet little kitten trapped inside the body of the Incredible Hulk.

Though ole Dusty wasn’t with us long, he leaves big paw prints on all of our hearts. Of all the massive bones in his massive body, not a one was mean. He was a good kitty. Clint and David, and the rest of us who loved him will keep his memory alive long after this Memorial Day.